Join Costa Vavagiakis for a painting workshop in Marsala, Sicily. Explore Greek temples, Norman castles, and colorful seaside towns in the historic heart of the Mediterranean. We will paint en plein air along ancient salt flats, picturesque seascapes, and at suggestive historic sites. While in Sicily, we will explore the cuisine, culture, and traditions of one of the most fascinating islands of the Mediterranean. 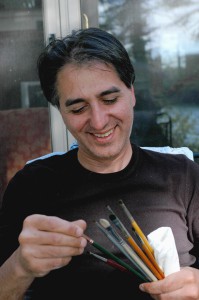 Costa Vavagiakis has exhibited extensively throughout the United States at galleries and museums such as The National Portrait Gallery, Smithsonian Institution, Washington, DC; Hirschl & Adler Galleries, NY; The Frye Art Museum, Seattle, WA; ACA Galleries, NY; Salander-O’Reilly Galleries, NY; and Hackett-Freedman Gallery, San Francisco, CA. His work is held in numerous public and private collections throughout the United States including the Museum of the City of New York, the New-York Historical Society, and the Arkansas Art Center. He has been the recipient of many distinguished awards, including the Pollock-Krasner Foundation Grant and the Gregory Millard Fellowship from the New York Foundation for the Arts. Costa is featured in publications such as Portrait Painting Atelier, Curve: The Female Nude Now,and in articles in Drawing Magazine, American Artist, American Artist Drawing and The Artist’s Magazine, among others. He currently teaches at the Art Students League of New York, NY; 92nd Street Y, NY; and Gage Academy of Art, Seattle, WA.